Sometimes I think we might be better students of history.  Right now, the big item in the American news scene is we need to build a big, beautiful wall between our country and Mexico and Mexico needs to pay for it.  The whole conversation brings back a memory.  Almost twenty years ago I was scrambling in the forest at the base of the Ming Great Wall in Nanjing, China. Now, this is one serious wall.  The average height of the wall is about 40 feet with a width of 24’.  In its original form, the wall ran about 22 miles and it took 200,000 laborers 21 years to build way back in the 14th century.  The top of the wall was wide enough to support an army and I can imagine the poor plight of folks trying to climb up and over the wall with a barrage of arrows, spears, giant rocks and giant pots of boiling oil raining down. It was meant to protect the city.  It eventually failed, of course. 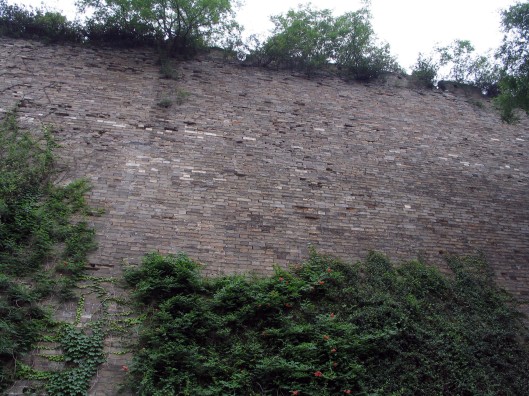 Professor Yin Yunlong of the Nanjing Botanical garden, now a longtime friend and kindred spirit, had asked me if we could take a look at a new problem on the wall.  We had stopped on the road below and scrambled through the forest to the base of the outside face.  It seems there was a fast growing vine that had taken over a stretch of the wall, its tendrils and roots invading the seams of the giant carved stones that made up the wall.  The wall was being degraded.  It didn’t take long for me to recognize that the culprit was an old American friend, Campsis radicans, our southern USA native trumpet creeper.  This wasn’t the rarely-encountered Chinese species (Campsis grandiflora) with larger flowers and a less rambunctious nature.  No, this was our southern USA native.  I can remember Yin remarking, “Dave, how do we kill this terrible noxious weed?”  Without thinking, I said “Hey, this isn’t a weed; this is a cool American plant!”  Thus I arrived at a narrative I use to this day.  My native is good.  Your native is bad. Some call it elitism.  Others call it discrimination. 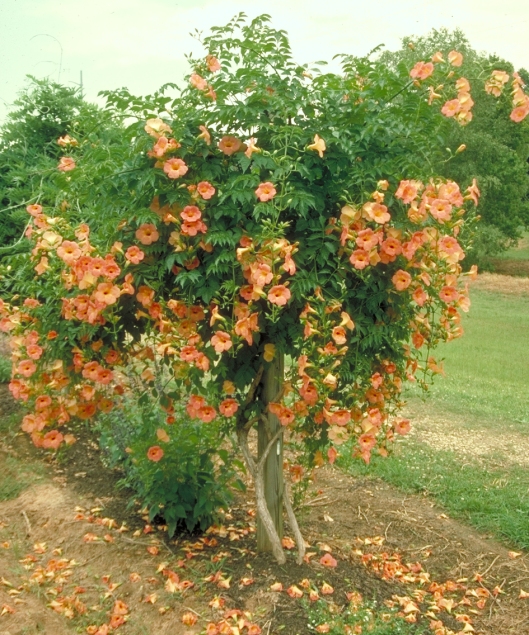 Our original Campsis grandiflora in the Arboretum’s Lines of Vines

Campsis grandiflora is different.  It’s less of a thug.  With outlandish orange-salmon-yellow flowers to fully three inches wide, this bright petunia-on-a-stick will shock and amaze.  Actually, after we first started growing the Chinese trumpet creeper at the SFA Gardens, I would get more phone calls on this species when it was in bloom than almost any other vine in the Arboretum.  Here in East Texas, flowering comes on in a surge in late spring and early summer, lasts a month, and then throws a few flowers off and on for the rest of the year, depending on the degree of pruning and training.  JC Raulston of NCSU was a fan and I think we received our very first plant from him.  I’ve seen it here and there in the South but it’s never really seemed to catch on.  Actually, most of the large flowered Campsis encountered are really the hybrid of our native C. radicans X C. grandiflora, which have been exploited and promoted – some even sold as C. grandiflora. 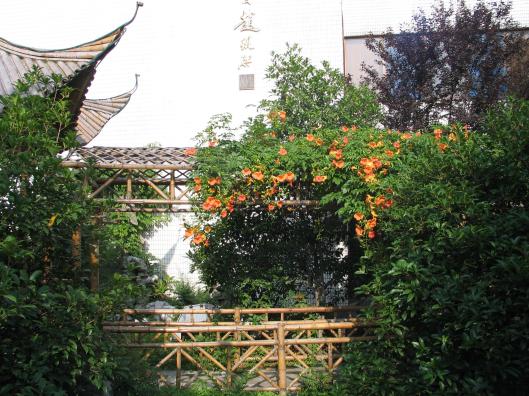 The simplest way to separate the two trumpet creeper species and their cross is by carefully looking at the calyx (all of the sepals, or the outermost whorl of the flower): Chinese trumpet creeper features a greenish calyx with long, pointed lobes; the American trumpet creeper enjoys a darker calyx with shorter lobes that aren’t quite pointed; and the cross lies in between. 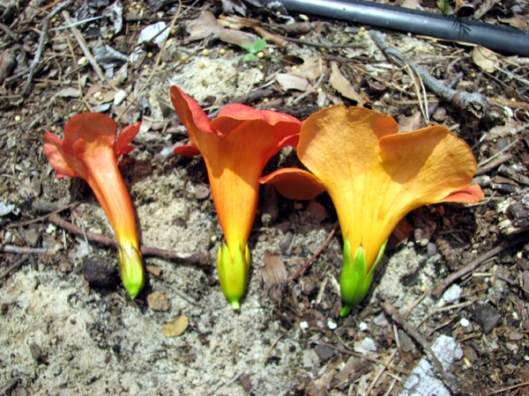 Much less invasive and obnoxious than our native C. radicans, C. grandiflora is often difficult to root especially if adult wood is used.  Once rooted, the plant is also tricky to time flowering in the container.  If young, vigorous juvenile wood is rooted, it can take a while to see flowers.  They’re unpredictable.  Looking at a sea of non-flowering Chinese trumpet creeper is not exactly what the nurseryman has in mind.  Now, there is a cross between the two and the hybrid is often referred to as Campsis X tagliabuana, most often represented in the USA nursery industry as ‘Madame Galen’.  This trumpet treeper features a large, showy bloomy often orange to red that appears in summer.  There are other varieties. 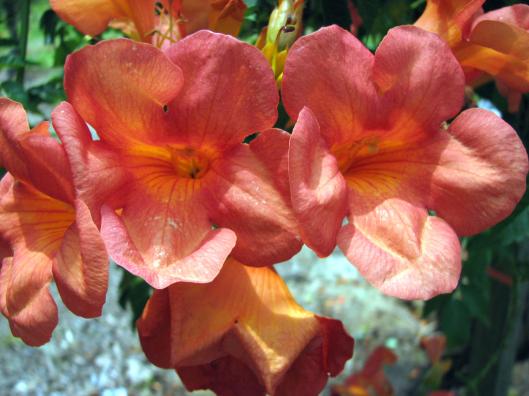 There’s another dilemma and this further complicates the picture.  C. grandiflora is self-sterile.  That is, until we can find “wild” Campsis grandiflora in China and bring in a good number of seed or seedlings, it’s going to be hard to improve the species.  The original Raulston clone is the same clone as the old clone in Florida and the old clone in Texas.   Being self-sterile, there’s no opportunity to explore the diversity in the species.  A bummer.  So, on a return trip to China years ago, I made the ask.  Evidently, it was thought to have disappeared in the wild – and all the Chinese trumpet creepers in Chinese landscapes are one clone.  Well, Professor Yin said he finally located some seed.  I was elated.  They arrived out of USDA quarantine.  I grew them for a year or two and then planted them in a long row along a fence.  In a year they bloomed.  ALL C. radicans, and not a particularly superior form at that.  My breakthrough was now a breakdown.  The saga continues.

Our native is often cursed for its invasive nature.  I’s a swallow your house kind of thing.  It suckers and sneaks around in the dark to emerge here and there.  Eternal vigilance is the order of the day.  If trained properly, however, and put in the right spot, it can be controlled.  I saw a nice plant in Little Rock, Arkansas that had the situation whipped. The vine was planted in a crack between a sidewalk and a large building.  Beautiful treatment. 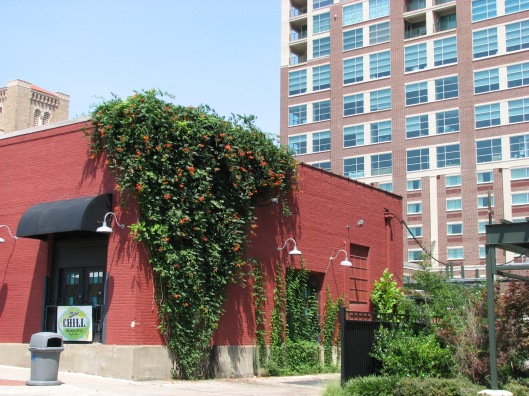 I planted a yellow form of our native in what I thought was a good spot.  It couldn’t escape and I just had to remember to return ever few years to whack it back.  It worked for years until I returned and noticed the business had killed it.  Struck me as a brilliant strategy.  Obviously the 2 mph speed bump sign didn’t slow the species down. 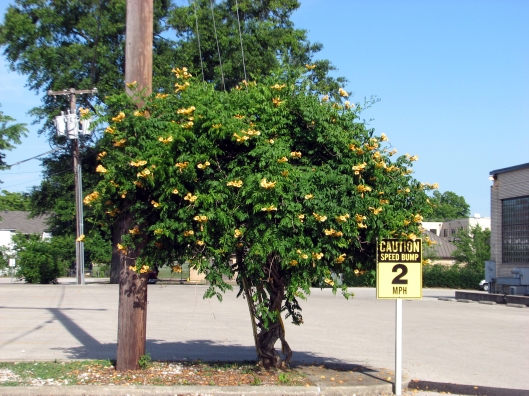 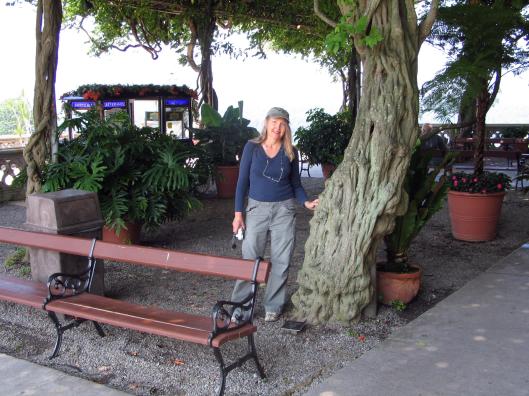 In a battle to the death, our USA native can take the Chinese form with one shoot tied behind his back.  It’s not even a fair fight.  It’s Texas tough, showy, a heat lover and if you wait a few hundred years, you can have something folks will marvel at.

3 thoughts on “Campsis grandiflora – where oh where is your home?”