Touching ancient trees is a habit of many of my tree obsessed friends. It’s a connection humans can make with the past, present and future.  Some of my more spiritual friends think it transfers a kind of cosmic energy from one to the other and vice versa.  I’m not sure about that, but I like the idea. 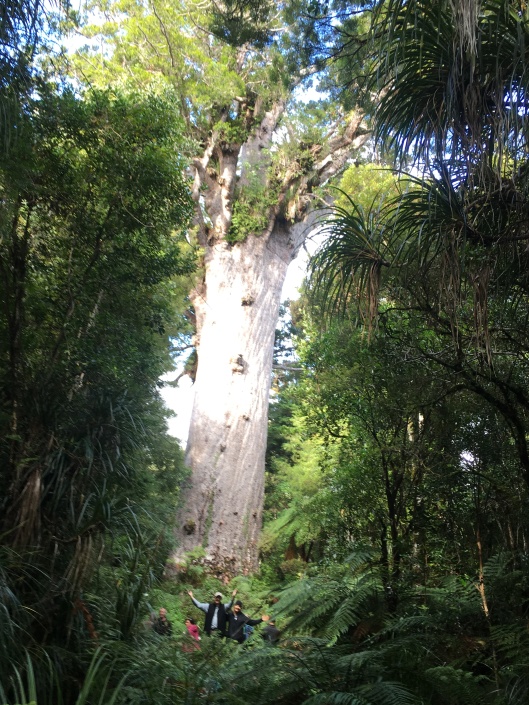 In early May 2017, Janet and I made the trek to the North part of the North Island in New Zealand to visit the last remnant of the ancient Kauri forest. The Kauri tree is Agathis australis which is one of a relatively small genus of 22 species.  It’s an evergreen tree, a member of the Araucariaceae family of conifers and was once widespread during the Jurassic, now restricted primarily to the Southern hemisphere.  The bark is smooth and light grey to grey-brown, usually peeling into irregular flakes. The lowest branches fall away, leaving circular scars.  The juvenile leaves are larger than in adults,  more or less acute. The male pollen cones appear usually only on larger trees after seed cones have appeared. The female seed cones usually develop on short lateral branchlets, maturing after two years. 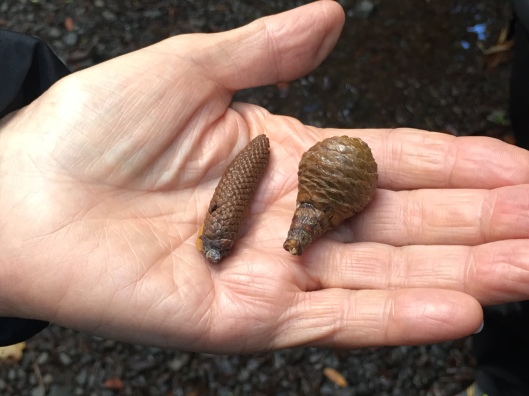 The original forest was logged heavily in the last of the 19th century and first half of the 20th century.  The kauri was popular because it enjoyed a straight bole free of knots and made excellent masts for ocean faring ships.  The timber is generally straight-grained and of fine quality with an exceptional strength-to-weight ratio and rot resistance, making it ideal for yacht hull construction..  The wood is commonly used in the manufacture of guitars and ukuleles due to its light weight and relatively low price of production. It is also used for some Go boards (goban). The uses of the New Zealand species (A. australis) included shipbuilding, house construction, wood panelling, furniture making, mine braces, and railway sleepers. Various species of kauri also yield various resins that have value.  While only 2% of the original forest now remain, what’s there is protected and under the conservation ethos of the Māori, the original settlers of New Zealand.

You can tell a lot about a culture in how they greet each other. For some, a  hongi is a traditional Māori greeting in New Zealand. It is done by pressing one’s nose and forehead to another person at an encounter.  With a hongi, the ha, or breath of life, is exchanged and intermingled and is thought to share the souls of both involved.  Through the hongi a person is no longer a visitor but is instead part of the people of the land.  With that status,  one is obliged to share in all the activities and duties of the people there.  In long ago times, that meant bearing arms in battles or in tending crops and harvesting the bounty of the earth.  So the hongi is a tradition that involves sharing the breath of life, an act that comes directly from the Gods. 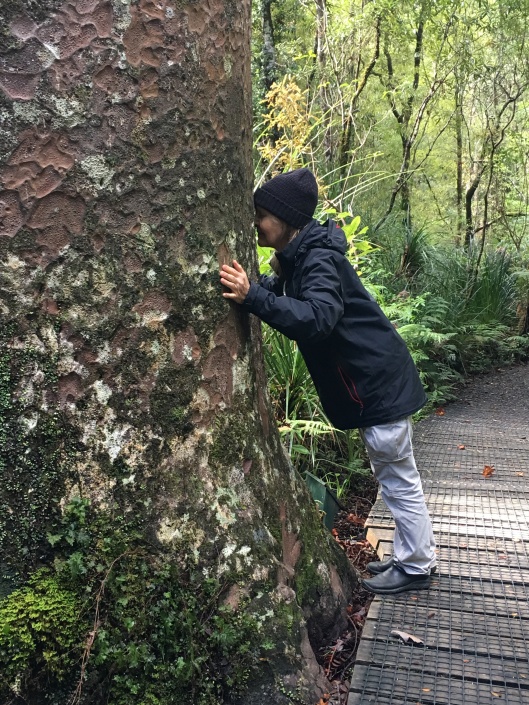 Janet planting a hongi on the ancient one

Tāne Mahuta is the big one.  Its age has been estimated at between 1,250 and 2,500 years. It is the largest kauri known to stand today. The Māori name is the name of a God and means “Lord of the Forest”.  There are other giant kauri nearby with the second largest being Te Matua Ngahere. The “Four Sisters” are nearby and thought to be siblings that made their home together.  Tāne Mahuta is certainly the most famous tree in New Zealand.  While known to the Māori well before European settlers landed, the stand wasn’t identified until the 1920s when road contractors were surveying for the road that how runs through the forest.

In the Māori creation myth, Tāne is the son of Ranginui, the sky father, and Papatuanuku, the earth mother. In this legend, Tāne separates his parents from their marital embrace until his father the sky  was high above mother earth. Tāne then sets about clothing his mother with flora and fauna.  These are regarded as Tāne’s children.   In 1971, the tree had a trunk girth of 45.2 ft. with a trunk height of 58 ft.  The total height of the tree was 168 feet and the trunk volume has been estimated at 8630 cubic ft.  Total volume of wood estimated at 18,250 cubic feet.

There’s a serious threat to the remaining Kauri.  From the Forest Phytophthoras of the World website: (http://forestphytophthoras.org/species/agathidicida ),  I offer the following:  “In 1972 a Phytophthora was associated with dead and dying trees in a kauri forest stand on Great Barrier Island, an island off the northern New Zealand coast . Symptoms included yellowing of foliage, canopy thinning and occasional tree death. The causative organism was identified as P. heveae by J. Stamps of the Commonwealth Mycological Institute. In 2006, Phytophthora ‘taxon Agathis’ was reported from kauri in a forest west of Auckland on regenerating and mature trees. The original identification of the causative organism as P. heveae was questioned, as the ITS–sequence of the isolate obtained from the Great Barrier Island and those from the mainland since 2006 was identical to P. castaneae. This raised the possibility that the kauri Phytophthora was a new species within Clade 5 of the genus (Blair et al. 2008). The ‘Kauri killing’ Phytophthora organism has been now formally described as Phytophthora agathidicida B.S. Weir, Beever, Pennycook & Bellgard (Weir et al., 2015), distinct from P. castaneae and other species of Phytophthora.”  There’s no doubt the disease has made its way in to the Waipoua forest and the trail entrances are equipped with sanitizers to spray the soles of shoes of any visitors, who are encouraged not to wander in the forest but to stay on the trails.  The shallow roots of the kauri tree are particularly susceptible to infection and dead and dying trees are nearby.  The long term prospects for the kauri tree will now rest with scientists who are feverishly screening for resistant seedlings with the hope that replanting will insure the forest remains.  Still, the long term prospects are seen as dismal and the chance to stand in the shade of these giants may not be with us forever.