Scuttelaria suffrutescens, the pink-flowering skullcap from Mexico has surprised Southern gardeners with its charm and durability. This is a neatly mounding sub-shrub to two feet tall and about that wide with fine leaves and twigs.  It’s a bright pink addition to the front of any border or as specimens massed. P.C. Standley describes the type specimen from Coahuila, Sierra de la Silla near Monterrey, as a small shrub.  While more popular in the gardens of central and west Texas, this plant deserves greater use in the dry, sunny gardens of East Texas with Zones 8 and 9 most suitable.  We have found that good specimens always elicit some kind of urge to pet the plant – probably because the mound appears and happens to be very firm to the touch.  The plant has a bright show in May and early June and the blooming period persists throughout the summer and fall under decent horticulture. 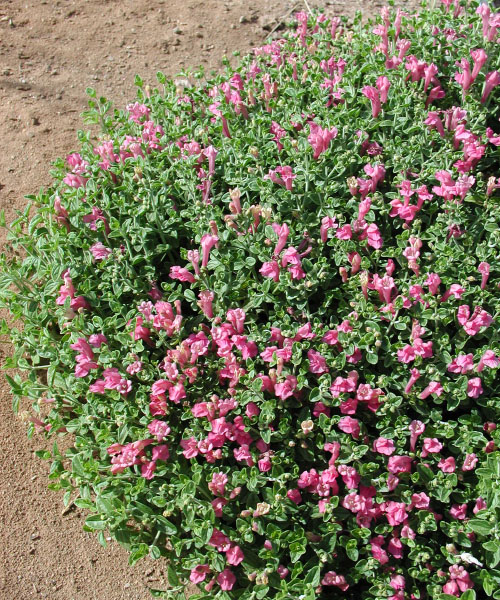 There are a number of pink-flowering forms of this species now appearing in mostly western nurseries but the form that we are displaying in the Arboretum carries an interesting history. It was found during an expedition to Mexico with Lynn Lowrey and Ray Jordan in October 1987.  From the Friends of the Arboretum Newsletter # 5, the chronicle of an expedition to the San Madre Oriental mountains I wrote that, “after backtracking east to the main road that runs between Montemerellos and Monterrey, we made one last side excursion to Chipinque.  The entire log of that trip can be found here:

. . . and I just noticed that some of the pages are out of order!  To be corrected later.  The mountain town and associated forest is home for thousands of Mexican redbuds, numerous oaks, and a forest floor of salvias and penstemons.  On one hike, a large-flowered Phaseolus vine was spotted, and, according to Lynn, the best find of the trip, a skullcap colony, Scuttelaria species.  This rhizomatous, perennial herb made a strong attractive ground cover in a few sun-lit forest pockets.” 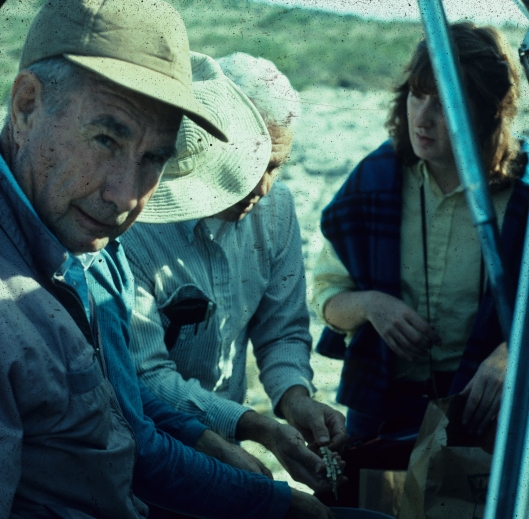 Actually, as I remember the find, I said, “Lynn, what’s that plant with the pink flowers,” and Lynn responded, “what flowers?” Amazingly, I came to learn that Lynn was red color blind and could only discern reds, pinks and greens at close distances.

This particular trip had as a goal primarily the collection of oak and other fall seeds; in the case of the Scuttelaria, a few cuttings were taken and rooted easily at SFA.  We have found that propagation is easy any time of the year with mist and plants should be moved soon after the first root initials make their appearance.  Leaving cuttings in mist after rooting too long can result in dead cuttings.

This is full sun plant for the South and should be give sharp drainage. A raised bed is perfect.  In the Arboretum, we have had good success with dry-loving plants by using sandy loam berms and a thin layer of crushed decomposed granite as a mulch.  The plant responds to fertilizer.  Some attention should be given the plants during the first two establishment years and we have not found the plant to be particularly rhizomatous, behaving instead like a green stiff mound throughout the year.  Most surprising, the plant survived the December 1989 dip to zero degrees F at SFA Gardens.

In a recent conversation with Tim Kiphart, SFA Horticulture alum, I learned the following. In 1990, Tim and Pat McNeal, Horticulturist from Austin, Texas, returned to the very same location as our original find. From a batch of seedlings, Tim selected a deeper pink/rose colored form and he later provided Tony Avent of Plants Delight, Raleigh, NC.  The only cultivar name I’ve ever seen is ‘Texas Rose,’ a name coined by Tony Avent.  Tim feels that seedlings result in better plants with better form than cutting grown.  Cuttings do root easy and grow off well.  As a small globe here and there, or as a very low statured ground cover, this is an interesting plant useful in the dry landscape.