The SFA Gardens have always hung its hat on planting a new tree or shrub species as soon as we can hunt it down. One of our patriarch trees fits that bill is Cinnamomum chekiangensis.  If you google this interesting camphor tree relative, you can still find current blogs and fact sheets touting its rarity and good performance.  It’s been in the landscape at the SFA Gardens since 1994. 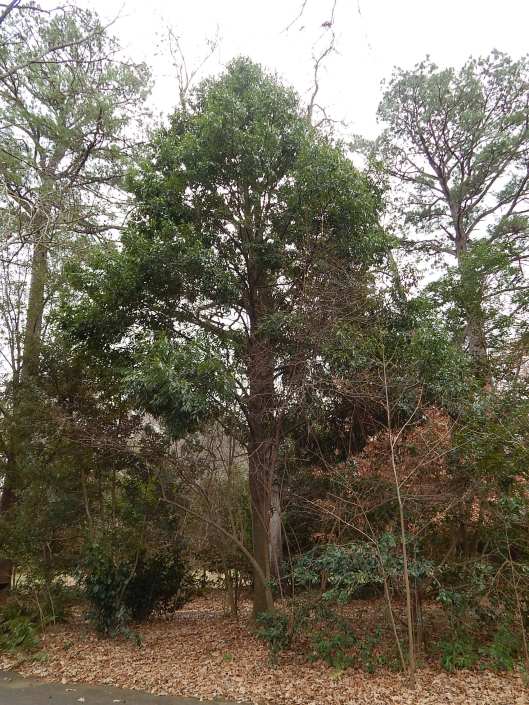 When measured January 10, 2017 our largest Cinnamomum checkiangensis tree was 44.5” in circumference (14.2” dbh) and I don’t know how tall, but it’s a well shaped towering evergreen in Asian Valley of the Mast Arboretum.  It’s another one of those surprising performers at the SFA Gardens.  At the time we planted it, I was thinking it’s a camphor tree so it’ll die here in a winter freeze.  No, it won’t. 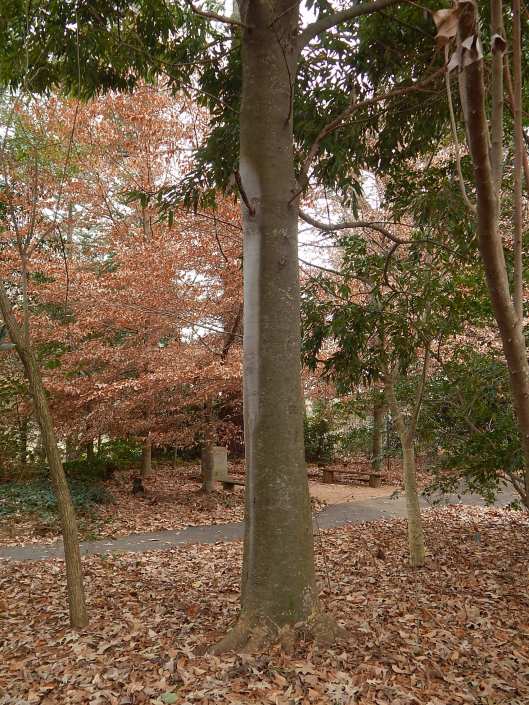 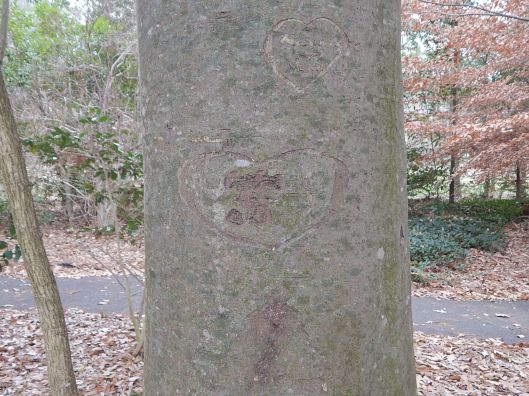 This hardy camphor tree has been in the USA about twenty years. I lectured about this tree in late September 1998 and that lecture is still on line, as part of the Proceedings of the Tenth Conference of the Metropolitan Tree Improvement Alliance.  The conference was held in Conjunction with the Landscape Plant Development Center and the Annual Conference of the Society of Municipal Arborists, St. Louis, Missouri.  Here are my 1998 comments on a tree that was new to the USA at the time.

“Cinnamomum chekiangensis, a recently introduced species of Camphor tree, is a promising candidate for east Texas gardeners looking for an attractive broad-leaved evergreen tree. I can’t locate the species in any of my references. Our tree was a gift of Kai Mei Parks, Camellia Forest Nursery, Chapel Hill, North Carolina and was collected in China by her husband, Clifford Parks, a botanist at the University of North Carolina at Chapel Hill. The species is evidently quite hardy; only in the ground four years, the tree has endured temperatures below 11°F. After seeing a thirty-foot specimen at Camellia Forest Nursery, I am convinced we now have a hardy camphor tree for our region. C. japonicum – the common camphor tree grown in semi-tropical and tropical locations, has suffered limb damage from mid-winter freezes during most winters and is no longer with us. The Lauraceae family is large with some 250 evergreen species, mostly strong zone 9 and 10 residents. This rare under-tested species should be hardy into Zone 7. We have observed the tree at SFASU for three years and have found it to be durable and attractive. It was planted as a small specimen in a raised sandy loam bed in the bottomland section of the arboretum. The tree is fifteen feet tall, an attractive dark-green pyramid, and endured a complete blow-down during the flood of October, 1994 (propped back up, some soil thrown on top of the root ball, and then staked for a few months). We rooted the species in high percentages with a May cutting collection and have about a hundred one gallons to be distributed.”

For twenty years, I’ve thought maybe this tree would just skip on by the invasive category.  It still may but our sole tree had never flowered until evidently this past year.  I just noticed (Jan 13, 2017)a few seedlings under the tree that I’m assuming are from the tree.  The fact our 17 degree F event a week ago didn’t need the 2″ tall children is not a good sign.  Being a Friday the 13th made it even a bit more ominous, certainly sad.  We’ll keep a close eye on this situation simply because it’s a Cinnamomum and we know how the less hardy cousins have done along the Z9 coast.  Bullies.  I

As mentioned in the 1998, it did have a tragedy early in its life, blown out of the ground with roots exposed after a heavy wind.  I shoveled it back in the ground and said, “Darn it!  Stay there!” Cinnamomum chekiangensis has smooth gray bark tempting to tree carvers eager to express their love or a message for future generations. The foliage is dark green, aromatic and attractive and the tree’s form is pyramidal.  Cuttings rooted quite well on our young tree (which was a youthful seedling at the time) and I haven’t tried to root it in recent years but suspect it should root nicely. 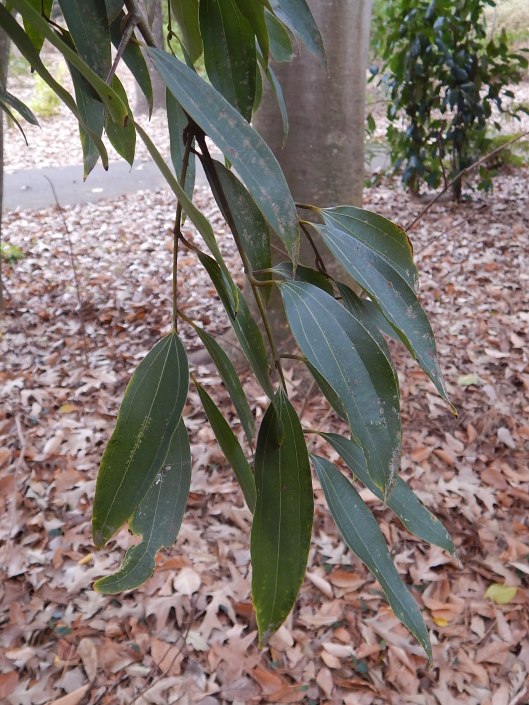 We have other Cinnamomums that are obviously hardy. Most of those are very rare in our region but have gotten remarkably large in the Ruby Mize Garden.  To be honest, they make me nervous.  They are yet to flower and we’ve seen no seed but their growth rate and disposition are impressive.  Time will tell. C. micranthum is huge with beautiful leaves, yet to flower, and is obviously hardier than the literature suggests.  We have four others that have surprised us as well, staying unmentioned until we have more data.  One thing we can say is that the hardiness ratings found in the limited literature are not accurate, at least judging by their performance in the SFA Gardens.  Whether or not they are or should be domesticated will have to depend on their tendency to take over. C. japonicum and C. camphora are known bullies in Zone 9 and 10 of the Gulf South and should be avoided.  They die here in Nacogdoches, taken out quite quickly by even mild winter freezes.

We like other big broadleaved evergreen trees at the SFA Gardens: 1) Machilus thunbergi is an evergreen native of Asia, a member of the Lauraceae family, and looks promising in the deep South – provided selections are sought that come from cold-hardy stock plants. We have seedlings from an old  specimen in Aiken, South Carolina, that endured below zero freeze events and we have one plant surviving of six clones (National Arboretum) planted just before the 1989 freeze, 2) Phoebe chekiangensis, another rare member of the Lauraceae family, has been a durable conical evergreen tree in our gardens. As for the Phoebe, we’ve killed it.  It’s nearly gone from the garden.  The old tree was cut down simply because it liked the garden too much; it’s invasive.  I like the tree, just would like to find a seedless form!  We are still removing chance seedlings here and there, some several hundred feet from the original big tree.  Like the Cinnamomum, I can find little in the literature concerning this plant. Finally, the last tree to mention would be Nothophoebe cavalieri which lives in a protected cove between the two Art buildings.  Even though protected, it still suffers freeze damage in our severest winters.  It does thrive at Mercer Arboretum in Houston, Texas.

Cinnamomum chekiangensis has proven itself in our garden and remains impressive.  Even after twenty years, we still need to hold on to a bit of caution.  I like to think of plants as innocent until proven guilty but knowing the family as we do in the Gulf South, it’s best to be prudent and keep a steely eye on the plant’s nature for invasiveness.  Then, of course, there’s the laurel wilt issue, a new disease just now hitting our bays in southeast Texas.  Emerging disease and insect threats are not a pretty picture.