The Parana pine in the SFA Mast Arboretum has a long and tortured history. The fact it’s still alive is a miracle.  It was a 1988 gift from Steven and Cathy Da Silva who ran Salamander Creek Farms, a small specialty plant nursery here in Nacogdoches, Texas.  Steve said it should be hardy but he wasn’t sure.  Having never run into the plant way back then, I called around and the tree just wasn’t part of the Gulf South picture.  So, I was skeptical from the beginning.  This is Texas and our summers are just a hair cooler than hell.  Not knowing any better we planted the tree on the South side of the Agriculture building in March 1988 in the middle of our annual display beds.  In fact, on March 13, 1988, we even had a little ceremony for the planting with Steve, five students (Dwayne Johnson, Barry Abatie, Margaret Taylor, Jeff Anderson and Tom Slack), yours truly and, of course the tree appearing in the Nacogdoches Daily Sentinel.  God only knew what the tree was about to face. 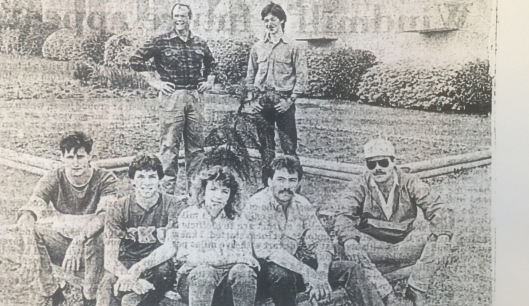 For the first two years, the tree settled in and didn’t grow. It looked about the same after two years as it did when we planted it.  It was green, looked healthy enough, but there was almost no new growth.  I would tell students, “it’s making roots”.  To add to the torture test, on December 23, 1989, the Arboretum was hit with a the lowest recorded temperature of all time, a frigid 4 degrees Fahrenheit.  I assumed it was a goner and it did shudder, turn a little bronzy but it just kept living. 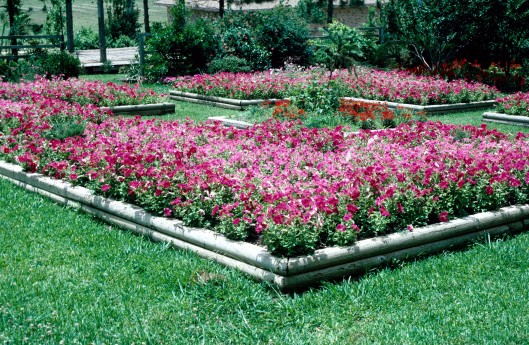 Araucaria angustifolia in its new home asking the question, “Why here?”

Fast forward a few years and we had a new cheerful Horticulturist on board, Greg Grant, and he wanted to do a redo of the South side of the Agriculture building, and as part of the renovation the tree had to go.  I accused him of hating the tree and after all, he had just personally chopped down a tulip tree that came from a seed from a tree planted by George Washington at Mount Vernon.  I agreed but said you have to move it carefully to a new spot on the east side of the Art building, a brand new conifer garden which was designed and planted by a long ago student, Matt Welch.  Matt was one of those rare students who would come to me asking, “do you think it would be OK if I . . . ” and before he could finish the sentence, I would say yes.  My general teaching mantra has always embraced the idea that plant nerds with passion need no brakes.  For the record, Greg’s “careful” part of the transplanting was abandoned and in the move, the root ball broke apart leaving only a few sad and pathetic roots.  It sat in its new home on the slope crying, “Why did you do this to me?”  I assumed it would die.  It didn’t.  In fact, it decided to heck with this, “I need to grow”, and grow it did.  I believe, until someone says different, this is now is the largest A. angustifolia in Texas?

In its new home, it sat a few years adjusting to the shock of such a rude transplanting but it wouldn’t die.  Amongst a bunch of relatives in the conifer world, it finally decided to grow and grow it has.  Through droughts and heat spells never seen before, the tree remains testimony to the tenacity of a species whose kinfolk go back to ancient group of Araucaria-related conifers that dominated forests more than 145 million years ago. 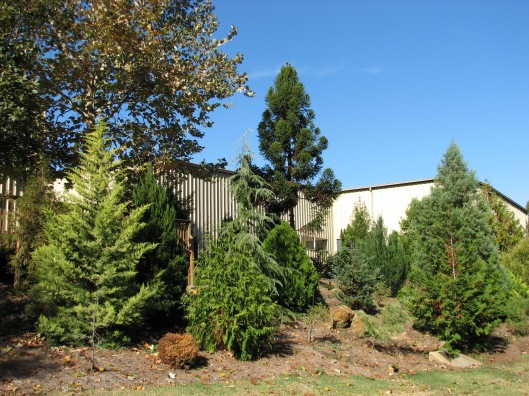 The Parana pine in August 2006

I don’t know how many years went by before I finally thought, “Gee, this tree is rather cheerful.  We have new growth, the bark is really showing off, and if you squint a bit, the tree looks like it could be hanging out in a subtropical forest in its home in Brazil. 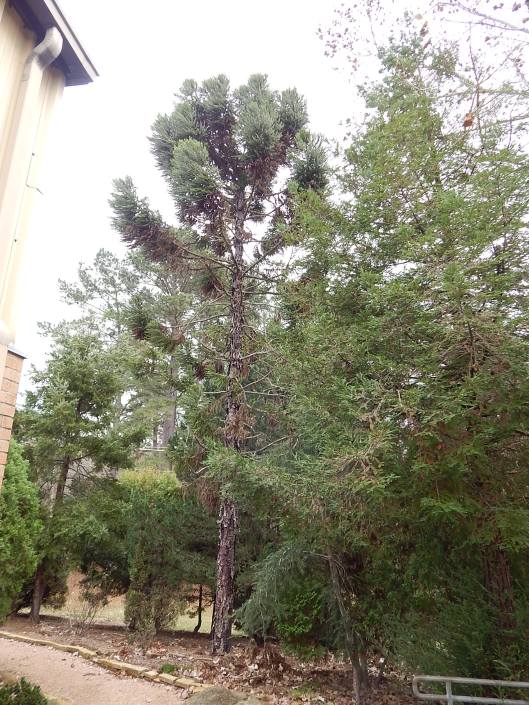 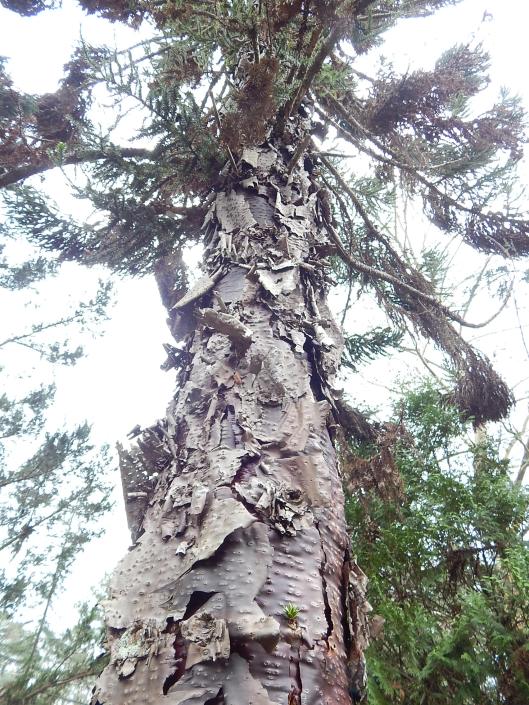 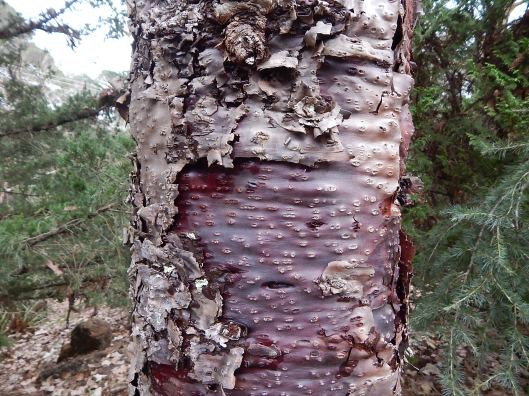 On January 10, 2017 I measured the tree and the circumference at breast height was 40.5 inches (12.9″ dbh).  I’m not sure on the height (40′?) but will get that information soon.  The tree sheds vicious branches that are tricky to the touch.  Spiny enough to deter a hungry Brontosaurus, perhaps.  The tree self sheds lower branches that litter the floor making walking there barefoot impossible.  Not for sissies. 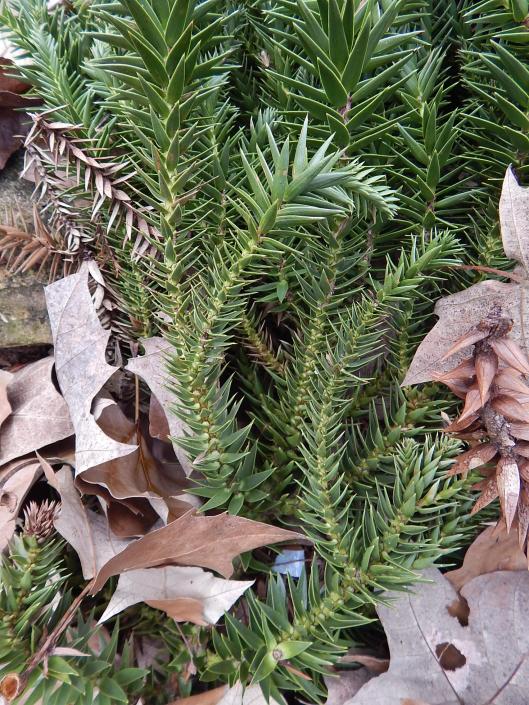 Several years ago, Janet and I used a “Big Tree Ap” on the phone to visit many of the heritage trees of Portland, Oregon.  One was the biggest Araucaria araucana (a close relative of A. angustifolia) with a 70′ Height, 37′ Spread, and 8.5′ Circumference.  I thought wouldn’t that be nice at SFA! 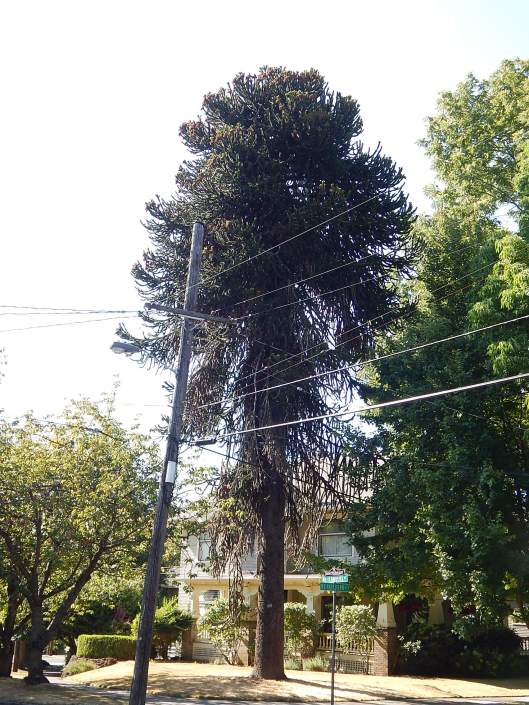 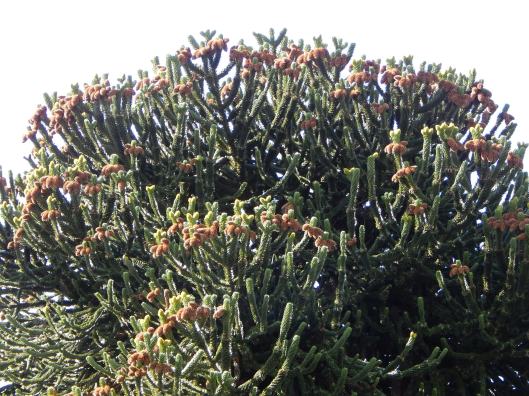 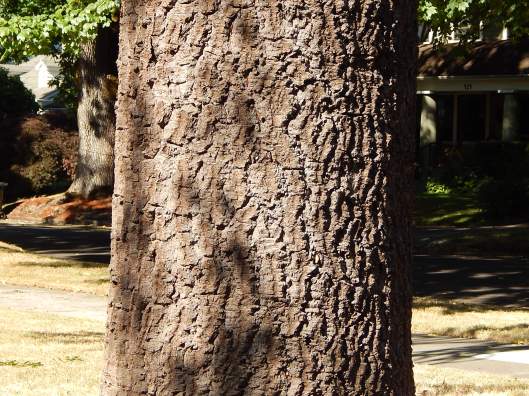 We’ve planted a few other Parana pines in the Arboretum hoping to create a colony that in a thousand years will amaze and befuddle visitors.  Because the tree is dioecious (male and female), we’re hoping to get a mix big enough to get some pollination.  The seed is hard to come by and often pricy.  Parana pine is a really unique rarely encountered tree, a prehistoric relic threatened in its home by land use changes, fire and climate change.  With time, perhaps the Gulf South will be the proper home for these botanical masterpieces.