Cunninghamia is referred to as China fir and is generally regarded as the most “primitive” surviving member of the Cupressaceae. It is not a fir (Abies) and most authors treat this evergreen conifer as a genus of two similar species, C. konishii of Taiwan and C. lanceolata of mainland Asia.  More recent studies have identified C. konishii in China and Vietnam as well. There’s another softer foliaged version that does well in East Texas, C. unicaniculata, which is considered, again, as a variety of C. lanceolata.     The Flora of China treats lanceolata and konishii as varieties of C. lanceolata, but other sources treat them as two separate species.  Let’s just say the nomenclature is still somewhat undefined.

Trees can reach over 100′ tall and over 6′ in diameter and are generally blessed with  pyramidal, dark green crowns. Bark is gray to reddish brown with fissures that crack into flakes that expose the inner bark.  Single trunk species are dramatic in the landscape. Over a century ago the trees were occasionally planted in landscapes, parks and courthouse squares in East Texas.  There were no doubt part of the mix of things brought into Texas out of Tennessee nurseries.  In Nacogdoches, we have some rather beautiful trees Scattered here and there.

They are indeed survivors.  There’s one nice tree in Nacogdoches, TX that rests at the front of the Westminster Presbyterian church on North street.  It’s a three trunker and while it’s a bit ratty, it remains quite a patriarch in our fair city.

I’ve encountered the tree all across the South and they no doubt date back to an era when the tree was obviously appreciated.  What drove the plantings remains somewhat of a mystery.  After all, it often features fallen branches, and the dead and dying spiny needles are no joy to the barefoot crowd.  Still the tree persists without attention or much care.

There’s one form that should be planted and it sports clean foliage most of the time.  We have several C. unicaniculata at SFA Gardens, including one that dates back to the 1980s.  They do root and we’ve multiplied them for giveaways and special friends that like the rarely encountered tree. 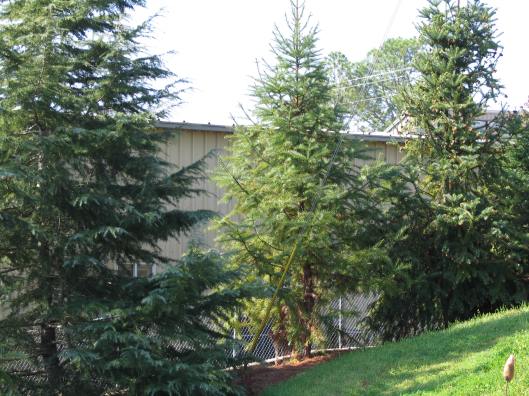 The center tree is C. unicaniculata of good form in our collection

China fir can be rooted but it is agonizingly slow.  Large cuttings taken in the winter and given bottom heat under mist will root after three or four months.  Moved to a shade house they take their time deciding to survive – or not – and in a year or two they can make a reasonable small tree.  They cuttings exhibit plagiotropic growth.  That is, the cutting never realizes it’s supposed to be a tree, choosing instead to think it’s a branch.  Cutting back the resultant rooted branch can force a shoot that finally becomes a decent leader.  Perhaps this is why the tree is rarely seen in commerce.

For the conifer enthusiast, there are several dwarf varieties to choose from but the fan club remains small.  For someone looking for an evergreen conifer rarely seen, this may be the tree for you.