In China, old sweet olive trees ( 桂花 ) are revered, signed and interpreted, and given holy attendance.  Protective fences mark their importance.  Tourists flock to gawk at their size and glory.  In fact, during October when the species is at its best, over ten Chinese cities honor the plant with a wide variety of special holidays.  In a carnival-like atmosphere, Chinese citizens flock to sweet olive festivals to bask in the fragrance and glory of the plant. Flower fragrance is held in high esteem, and I was told that with some varieties, only two flowers floating in a tea cup were needed to fill a small closed room with fragrance. The most ancient plant known in China rests comfortably in the grounds of the Shengshui Temple, Nanzheng County, Shannxi Province and is over 2100 years old.  It’s forty feet in height and this mystical tree was planted by the Xiaohe himself, the Minister of the Han Dynasty.  The most impressive tree that I’ve seen up close was the stately specimen in the landscape of Linggu Temple, Nanjing city, Jiangsu province and this dense-foliaged giant is over 20’ tall, sixty inches in circumference and sports a crown diameter of 25’.  It rests alone in the valley and when in bloom on a still early morning the entire valley is filled with its magic.  Keep in mind that sweet olives are one of the ten “traditional flowers of China” and this is a species planted in the millions.

Ancient sweet olives are status symbols and the rich Chinese will spend thousands, tens of thousands and even hundreds of thousands of dollars to own a specimen tree.  With the grand scale of development in China it’s not surpising that many ancient sweet olives have found themselves in the way.  These trees are dug, relocated, cut back, and given special attention for a decade or more before finding a permanent home.  Time is an interesting thing to a Chinese businessman – ancient trees are an investment.

In plant-hunting circles, one of the treasures yet to say hello in southern horticulture is the elusive red-flowered form of sweet olive, Osmanthus fragrans.   I’ve seen O. fragrans ‘Zhusha Dangui’ in a sweet olive garden near Suzhou, China with flowers just a bit spent, but reddish orange enough to drive me to fighting the urge to liberate a cutting.  I didn’t because Chinese jails are reported as Spartan and I’m timid about things like that. Whether or not a true red exists in culture or in the wild is the stuff of legend, rumors and innuendo.

Over many years, I’ve been working in southeastern China on various projects.  During one of my visits in 2004, I was invited by scientist Xiang Qibai of the Nanjing Forestry University to participate in the first International Sweet Osmanthus conference in Shanghai, China in early October, 2004. Xiang’s work is legend.  He is a Professor, Doctorate tutor of Botany and Landscape Plants of Nanjing Forestry University, Director of Research Centre of Osmanthus, N.F.U., and the Vice President, Sweet Osmanthus Branch of Chinese Flower Association.  I soon learned there was a catch to my visit.  I had to deliver a presentation on “The Status and Use of Osmanthus fragrans in Southern USA Landscapes”.  Well, that seemed easy enough but I thought my knowledge the subject might be more or less summed up in a minute or two.  Fortunately, with the help of my friends across the South, I managed a talk that acquainted our hosts with the plant in the USA, the dozen or so varieties available, its production in the nursery industry, and its use in southern landscapes.

Professors Xiang Qibai and Liu Yulian, Nanjing Forestry University, are coauthors of the Illustrated Monograph of the Sweet Osmanthus Cultivars in China – June 12, 2016

The 2004 conference included one day of talks from international and Chinese lecturers and then, best of all, two days of touring gardens in Shuzhou and Hangzhou famous for the species.  Native to China and enjoying a wide range, there are many old patriarchs over 1000 years old.  China has applied to the International Horticulture Society to be the official International Registry for the genus and this certainly makes sense.  After all, China is home to a long history with the plant and harbors most of the world’s ancient germplasm of the species.

There are now over 157 varieties of sweet olive in China divided into four main groups: Fragrans, Latifolius, Thunbergii, and Aurantiacus.  It’s the latter that’s attracted the plant hunter’s eye, for it’s this group that finds the orange and orange-red flowers.  In the last twenty years, an effort has been made to preserve the species in China and select superior cultivars.  Cultivars have been selected for flower size, characteristics of the flower, abundance of flowers, time of bloom, tree form and habit, bark, branch, leaf, pedicel, and fruit. Osmanthus fragrans has been in cultivation in China for over 2000 years, well before it was ever introduced into the west in 1856.  The most exciting recent introduction into the USA is ‘Fudingzhu’, or more popularly known as ‘Nanjing Beauty’.  It’s very floriferous, white flowered, and is known to bloom quickly in the nursery container and over many months. 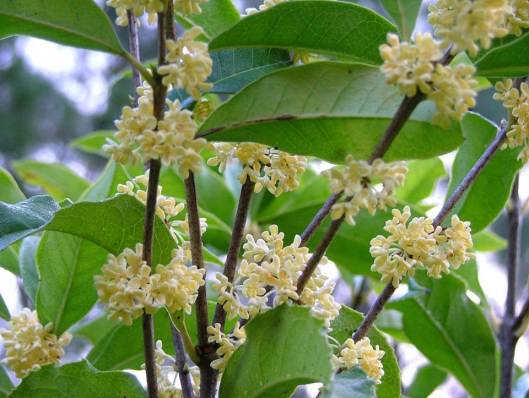 O. fragrans var. aurantiacus is the orange-flowered form that one can find occasionally in the landscapes of the South and it’s a treasure when it reaches peak bloom and fragrance.  Unfortunately, the blooms only last a few days but you can spend the next twelve months in high anticipation.  Dirr lists nine varieties, but there are others and none have taken the trade by storm. 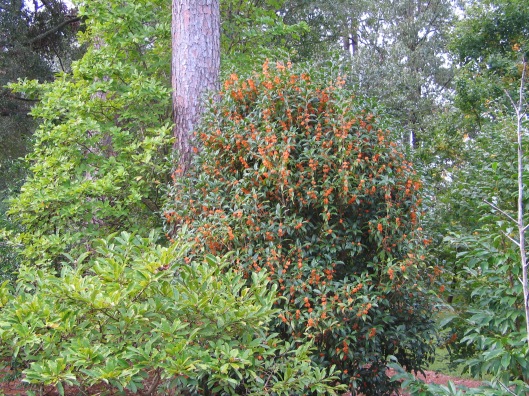 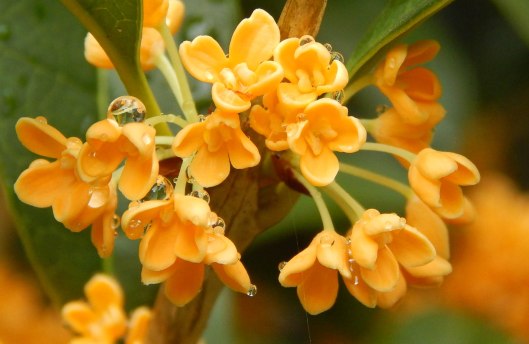 There are numerous varieties in China and most have yet to find their way into commerce there or anywhere in the world. 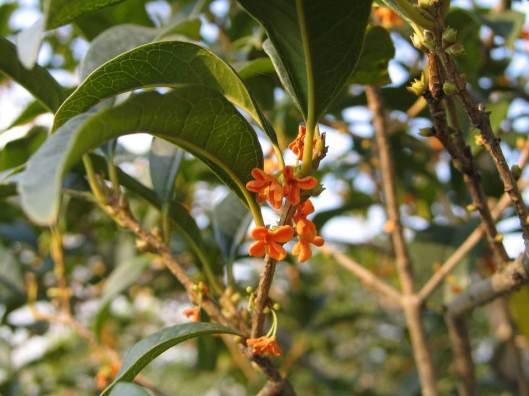 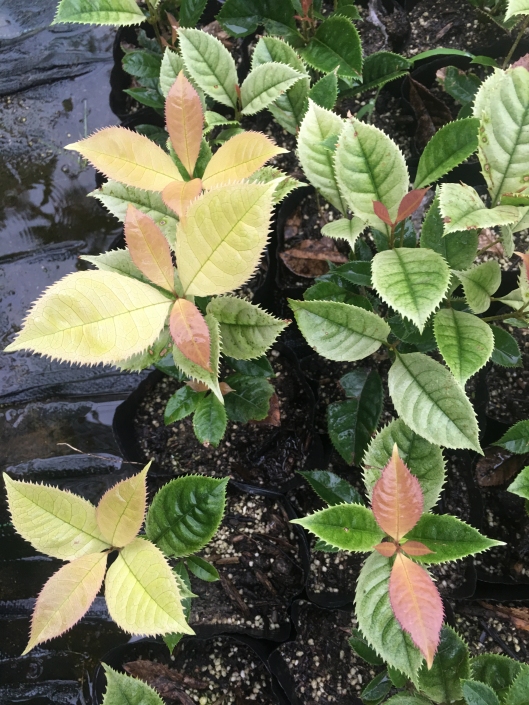 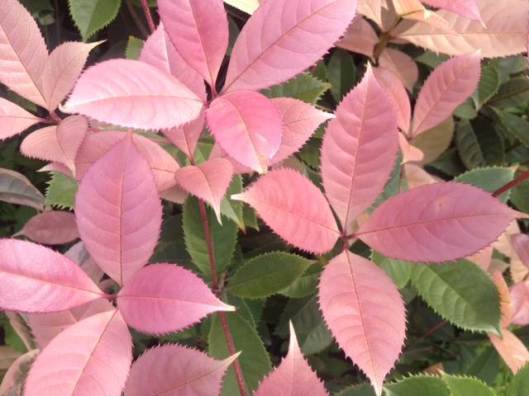 In the mix of things, there are reports of many “colorful” leaf forms with some sporting red to burgundy to pink new growth. I ran across a form with contorted branches in Suzhou China.   However, I can now say that yes, variegated forms do exist.   In June 2012, I visited a very small nursery near Chang Jie village, Ninghai county, Ningbo city in Zhejiang province in southeastern China.  Knowing my interest in the species, my hosts made arrangements for me to visit Mr. Wang who is a carpenter by trade, but owns a small specialty nursery as a side business.  Mr. Wang wrestles very large and ancient trees from the mountains, cuts them back dramatically, and then brings them to his small patch of ground.  He then nurses them back to health for resale as a large ball and burlap tree to other nurseries, to some of the rich businessmen in the region, or to city parks.  There’s a lot of that in China, and sweet olive is part of that effort.  In this case, it didn’t take me long to see the small grafted variegated trees in the nursery.  With a distinct creamy white leaf margin surrounding a light green center and new growth featuring a pinkish-mauve tone, I was quite taken.  When I inquired about the “name” I learned he called it, ‘Yin Bian Cai Ye Gui’ which simply refers to it as a colorful leaf version.   Good enough for me.

I learned that Mr. Wang must graft these onto older trees to get them to grow. Small stub grafts are stuck in the early spring, wrapped thoroughly and the take is “OK”.  However, they are never rooted as they are “weak” on their own roots and need a big tree to push the top to good size.  He will grow these into a big ball and retrieve a very high price for the ultimate specimen.  Although it takes many years to produce a saleable specimen, he looks at this as a kind of Chinese retirement plan!  This clone is now at SFA and while it grows ever so slowly, it’s alive and well.

Grafted on to a sweet olive

There’s another species, O. yunnanensis, that is rarely encountered and we are proud to have a large specimen in the Ruby Mize Garden.  While never destined for the mass market, it boasts good fragrance and growth rate. 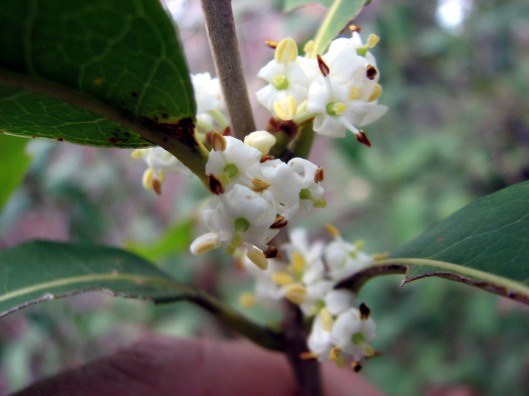 In terms of popularity, sweet olive has a long way to go in the USA.  We visited one nursery near Guangzhou that produces 1.5 million cutting grown plants per year!  While most Chinese nursery plants are destined for the China marketplace, which is huge, there is growing interest in exporting new cultivars and plants to the international market.  For that to happen there will have to be cooperation, marketing and promotion.  Until that happens, southern nurserymen and landscapers are encouraged to take a new look at an old friend, the sweet smelling sweet olive.