Canbyi oak is a mid-sized semi-evergreen oak that can be found in the Texas nursery and landscape trade. A fine specimen was planted in 1986 at the front of the SFA Mast Arboretum along Wilson Drive.  This particular tree came from acorns collected at Nuevo Leon, Mexico, and was referred to by Lynn Lowrey, famous Texas plantsman, as the “evergreen form”.   In most winters, it is evergreen but single digit temperatures remove the foliage but we’re never noticed limb die back or bud damage.  This particular tree has never received irrigation and it did well during the epic drought here at SFA Gardens in 2010 and 2011.

Canbyi oak has proven to be very drought and alkaline tolerant in Texas.  Sometimes referred to as the chisos oak, slender oak, or graceful oak, the range includes Nuevo Leon and Tamaulipas in Mexico, and the Chisos Mountains in Texas.  The species is encountered in rocky canyons and is rarely abundant.  Growth habit is 4-15 m. (16-50 ft.) tall and long branches are somewhat drooping, thus the word graceful.  The bark is distinctively fissured and attractive.

Shiny green leaves are 7.5-10 (2.9-3.9 in.) long and 2-3 cm. (.8-1.2 in.) wide and are lanceolate to narrowly elliptical with a pointed apex.  Acorns are small, 1.5 cm. (.6 in.) long, somewhat narrow and without a significant peduncle.  The cup is shallow and covers only 1/4 to 1/3 of the cup.  The nomenclature of Q. canbyi is complicated and there are a number of synonyms.  It has been described as a variety of Q. graciliformis in the south of its range, northern Mexico, but most authors consider Q. gracilformis as a form of Canbyi oak.  It is also associated with Q. langtry, which is also thought to be a form of Q. canbyi found near Langtry, Texas. Most impressive is the extremely clean foliage.

Propagation is normally via acorns and SFA seedlings appear quite uniform in spite of the fact that other oak species are nearby. There are obvious hybrids in a seedling batch but they are easy to segregate.  There is one paper involving cutting propagation that does indicate some promise for rooting superior clones (McGuigan et al. 1996).  That work indicated that semi-hardwood and hardwood cuttings did not root; however, softwood cuttings did show promise and a linear decrease in rooting in response to IBA was observed with the greatest rooting occurring for the 1500 PPM K-IBA treatment.  More research is needed to better determine timing and rooting hormone effects on percent rooting.  The authors noted that the rooted cuttings should be left undisturbed after rooting as the roots are very brittle and easily damaged. 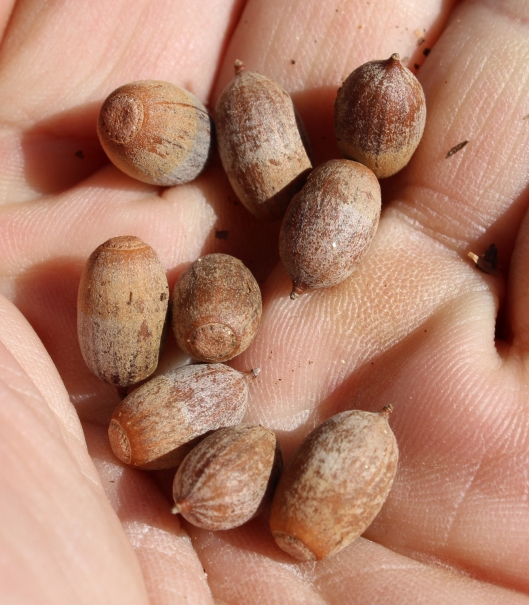