Relatively rare in cultivation in the USA, and still rarer still to bloom, I was amazed to find our nine-year old 25’ Emmenopterys tree in full bloom on July 12, 2007.  I first thought our new bragging rights would bring bands, parades, speeches and never-ending press coverage.  I imagined my plant-possessed friends breaking out in heart palpitations.  Of course, none of that happened.  We did get some good local press and my horticultural friends and I emailed each other and, yes, there was some excitement, but nothing front page.  The blooming of this rarely blooming tree certainly couldn’t hold a candle to the hoopla that surrounded the blooming of Jack, the corpse flower (Amorphophallus titanum) in our shade house in June, 2004.

We accessioned two Emmenopterys henryi plants in 1998, one a gift from the JC Raulston Arboretum in North Carolina (SFA 183-98) and the other plant (SFA 431-98) has no source in our records.  At any rate, both were planted in 1999 in the newly founded Ruby M. Mize Azalea Garden, now one of the four gardens under the SFA Gardens umbrella.  Our two trees have grown vigorously and are quite attractive in foliage.  Our largest tree, the first to bloom, is now a full 25’ tall and perhaps 20’ wide at this writing (Nov 2009).  While apparently quite healthy, the tree has not bloomed since the 2007 event.  Clean, large opposite leaves feature attractive red petioles.  Our two trees rest under a high canopy pine forest and enjoys a moist well drained soil.  Both trees have grown vigorously and sport attractive ridged light-colored bark that is quite striking.  White flowers are in panicles about 6” high and 8” wide with individual flowers a little less than an inch wide.  The flowers are reminiscent of Pinckneya pubens. 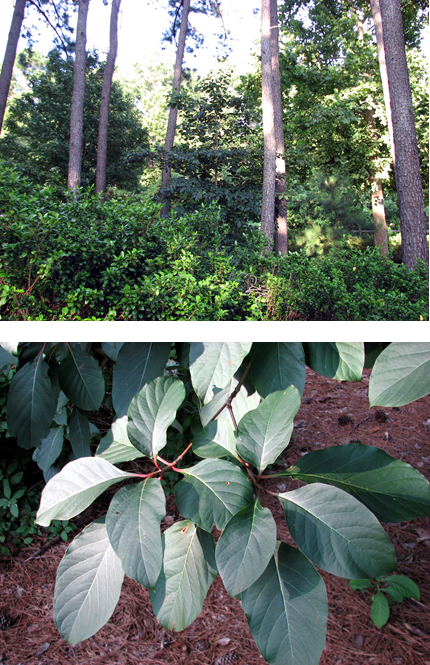 A little history: Emmenoptyers henryi enjoys a wide distribution in south central China and old trees are reported to reach over 100’.  E.H. Wilson, renowned plant explorer, first introduced seed into the USA at the Arnold about 1907, but no plants seemed to have survived that original introduction.  The first flowering in the USA was recorded in July, 1994, in the garden of Dr. Allen Hirsh of Silver Spring, Maryland, a suburb of Washington, D.C.  This plant came from a 1979 introduction of seed to the Arnold Arboretum from the Nanjing Botanical Garden.   Woodlanders Nursery in Aiken, South Carolina, received extra plants and Dr. Hirsh purchased his plant in 1988.  When the plant bloomed it was fifteen feet tall.  I have seen the plant in bloom at Garvan Gardens in July, 2007, near Hot Springs, Arkansas.  Bill McNamara of Quarry Hill Botanical Garden was the first to bloom the plant on the west coast with a plant only six years old.  The seed for that tree came from Quarryhill’s expedition to eastern Sichuan in 1996.

Bill McNamara has a nice travelogue of his time in China.  http://www.quarryhillbg.org/emmenopteryshenryi.html

While the literature reports the plant is slow to bloom, most of those reports come from “northern” gardens. Perhaps it’s the stifling heat of summers in Texas that steered our plant into a rare flower show.